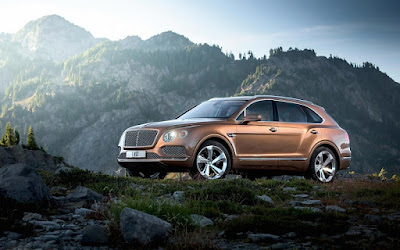 Legend has it that Ettore Bugatti once called the Bentley 4½ Litre the “world’s fastest truck.” We’re guessing that he didn’t know he was merely being prophetic. Because now Bentley builds an SUV, and guess what? Its 187-mph top speed is the highest on record for a vehicle of that type. 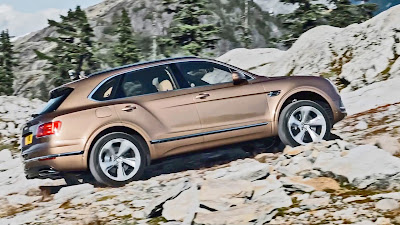 Why an SUV? Simple: People who drive Bentleys tend to have other vehicles (a lot of them), and the vehicle they drive in the winter—or when it’s raining, or foggy, or below 75 degrees—tends to be an SUV. Now that Bentley makes an SUV, a lot of those buyers will make that SUV a Bentley, as well. 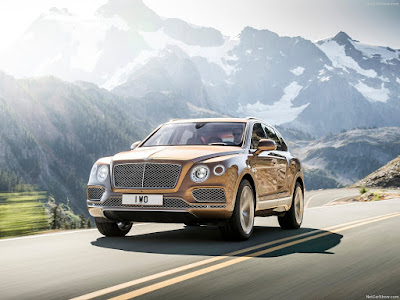 For the last three years, Bentley has sold more than 10,000 vehicles annually, a major milestone for the company. The Bentayga is going to help obliterate that record: The company plans to build 5500 Bentaygas in 2016. That estimate already has been revised upward once, and company executives tell us that, as interest builds, that figure may enjoy yet another upward correction. 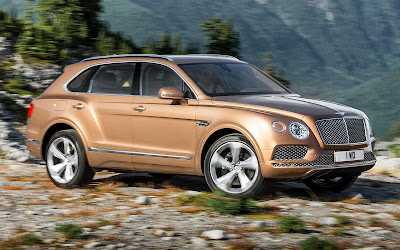 The Bentayga will join Bentley's line comprising of the fast Continenetal GT, sublime Flying Spur and the majestic Mulsanne.

And while the Bentayga might be tall for a Bentley at 68.6 inches, it’s not otherwise particularly large for one. At 202.4 inches long and 78.7 inches wide, it’s about 17 inches shorter than a Mulsanne and three inches wider. At nearly 5400 pounds, it’s about 550 pounds lighter than the Mulsanne and just shy of a Flying Spur W-12. The floorpan is steel, but most of the rest of the sheetmetal is aluminum, including all exterior panels. Bentley says that the body side is the auto industry’s largest single aluminum stamping. 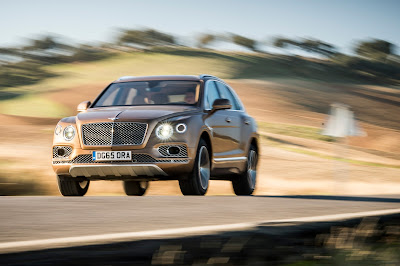 With its (relatively) low mass for a Bentley, the Bentayga is kind of spectacular to drive. The damping of the multilink front and rear suspensions is exemplary. Even over the extreme speed bumps peppered throughout the hamlets of southern Spain, the most massive of wheel displacements are forgotten in a single, gentle compression and rebound of the suspension. The electric power steering is weighty and direct, although it doesn’t enjoy a ton of feel. But by SUV standards, it’s excellent. As are the brakes. The pedal is firm and progressive, and even barreling down the twisting switchbacks of the Sierra Blanca mountains, there was never a hint of fade. 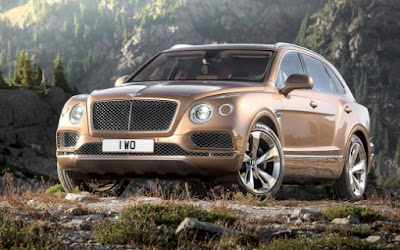 Handling is neutral enough that you’ll forget this is a 5400-pound SUV with a 12-cylinder engine in the nose. Sure, you can force it into understeer, but you can also set it up to flow through turns better than a vehicle this size has any right to, mostly because it corners remarkably flat. Its outstanding body control is the result of Bentley Dynamic Ride, a new active anti-roll bar that counteracts natural roll with a pair of electric actuators, one at each end of the vehicle to stiffen and soften the front and rear bars. It’s a trick system, but don’t expect the sports-car world to rush to adopt it. In order for the system to act quickly enough, says product-line director Peter Guest, it needs to operate on 48 volts, with a supercapacitor meting the voltage. With the bars, the actuators, the supercapacitor, and the heavy-duty cables—which he says are about four times the diameter of most automotive cables—the system weighs between 30 and 40 pounds. Bentley chief executive Wolfgang Dürheimer says Bentley Dynamic Ride is technically capable of leaning the Bentayga into a turn, motorcycle-style, but, in the interest of passenger comfort, the company stopped short of allowing that capability. We’d be quite interested to see what sort of impact that would have on cornering. The system allows a firm, controlled—but never harsh—ride on pavement but allows maximum wheel articulation off.

Ready to Crawl
That’s right: off road. Because this is a Bentley meant for dirt, our drive included some semi-serious off-roading. At first we feared that the trail was going to be too easy, something a rental Toyota Camry could conquer, but we got into some pretty tricky attitudes—the oiling system is designed to keep the engine lubricated at up to 35 degrees of tilt in any direction. We crawled through a few ditches that had the Bentayga alternately kissing the ground—a few trucks in our group actually did scuff their chins, an occurrence that is probably about 10 times more expensive than your entire beater Jeep—and hanging a rear wheel off the ground at full suspension droop.

There are, of course, additional vehicle settings for off-roading: snow and grass, dirt and gravel, mud and trail, and sand dunes. There are two suspension settings that raise ground clearance a little or a little more (Bentley declined to provide specific figures). Hill-descent control holds your speed on downslopes, and there’s an infotainment-system screen that monitors each of these settings as well as wheel articulation and incline/decline and side-slope angles. Also, the front parking camera is well suited to peeking over sharp crests for a better view of what’s out of sight below the Bentayga’s domed hood. Some of these features distract from the simple joy of driving through nature—as does the pulsing of the brakes mimicking limited-slip differentials—but you don’t have to use them. They turn off automatically above 47 mph in case you accidentally drive onto pavement with them still engaged. At the end of the trail, Bentley had positioned a car-washing crew, but we waved them off and finished our drive proudly wearing a fine dusting of ruddy dirt over our Bentayga’s immaculate Verdant Green paint.

The off-road driving might be impressive, but the de rigueur semiautonomous operation is less so. As is the standard for modern luxury vehicles, the Bentayga pairs its adaptive cruise control with an automatic lane-keeping function for short stints of hands-off driving. But like many of them, Bentley’s system tends to either ping-pong back and forth in the lane or crowd the middle of the road with the wheels nearly on the center line. If you signal to pass the car in front, it won’t pull out like the Tesla Model S does, but it will accelerate toward the car ahead, which seems like the wrong order of operations. We found the system more annoying than helpful, fighting us with little steering-wheel tugs on even our most relaxed lines through corners.

Where once there were rumble strips and other motorists honking, now there’s electric power steering jerking the car back and forth. It’s not necessarily more graceful than the old system, but at least it’s less obnoxious to other motorists.

The new W-12 shares its bore spacing with its predecessor but no parts. Bentley shaved 66 pounds from this generation, an impressive feat with such a dense box of mechanical parts. Engineers pulled precious ounces from everything—the block, heads, crank, and cams to name just a few. The one system that isn’t lighter is the fuel injection, which now has direct and port injectors. At idle and under full load, the direct injectors do their precise work, while the port injectors are engaged at part throttle, when they’re said to better mix fuel and air while reducing emissions. Bentley also claims the W-12 is 10 percent more efficient than its predecessor, with cylinder deactivation shutting down six cylinders when conditions are right and a “sail mode” that decouples the engine from the transmission when the driver is off the throttle at higher speeds. We noticed neither system at work.

Product-line director Guest says that twin-scroll turbos are much of the reason the W-12 is all-new—the engineers couldn’t fit the faster-spooling turbos onto the old engine. Here, they’re so snug against the block that they’re almost integrated into it. And they actually are integrated into the exhaust manifolds. New oil pumps make sure the turbos get a steady supply of fresh oil even at extreme off-road angles. 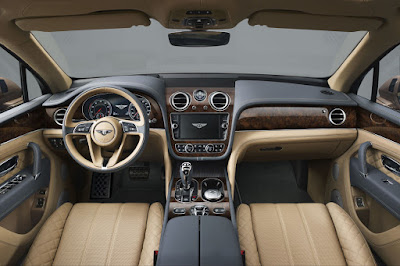 Guest also tells us that the sound insulation that enables Bentley’s famously serene interiors means that those worried about off-road dust in their Bentleys have nothing to fear. Like any Bentley, the Bentayga uses triple seals around all openings, and sound waves are smaller than any particulates. “Once you’ve insulated for noise, you’ve insulated for everything,” he says. 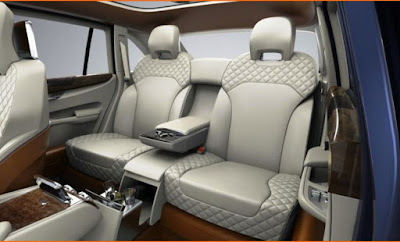 The Bentayga’s interior is one you want to keep pristine. Buyers can choose from 15 colors of hide to trim the cabin, in three different two-tone layouts, plus contrast or matched stitching and piping. There are seven different veneers—heck, there are 14 different seatbelt colors. Not only does the instrument panel still use physical gauges with real needles, but those gauges are protected behind a sheet of actual mineral glass, rather than the plastic used on just about every other vehicle. The speaker grilles are even designed to mimic high-end stitching. 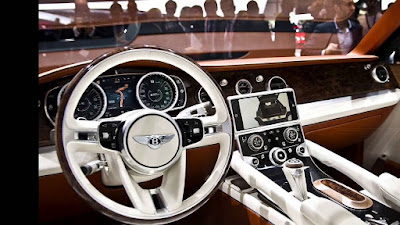 And of course that’s only the beginning. Buyers can spend $5715 on extracost paints, $7870 for the Touring Specification technology package, $11,015 to replace the three-place rear bench with two individual thrones, $7155 for a pair of removable tablets to put in front of those seats, and $28,500 on carbon-fiber trim. Plus, a ton of other stuff, including pie-in-the-sky customization. It’s pretty easy to send the base price of a Bentayga from $232,000 to well north of 300 grand. 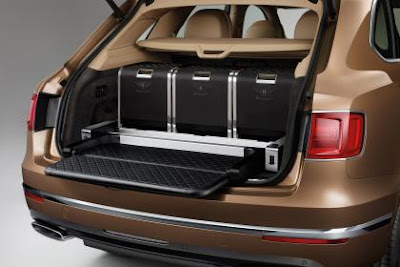 But the coolest (and most appalling) thing in the Bentayga interior is the optional Breitling clock set atop the dashboard. It’s available in either white or rose gold, with a face of black or white mother-of-pearl, and studded with eight diamonds. Cost? 150,000 euros, or about $160,000. Only a handful of craftspeople make the clocks, which take three months apiece.That exclusivity guarantees that Bentley will sell the four it can offer every year.

Even without that clock, the Bentayga should vacuum massive amounts of cash into Bentley’s coffers. As the Volkswagen Group, in the wake of its diesel scandal, scrutinizes the business case for every last model in its portfolio, maybe Bugatti will want to take its own crack at that “world’s fastest truck” business.
Posted by ronV12 at 08:56