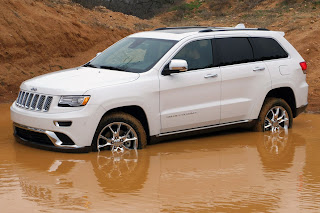 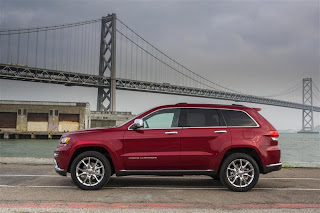 The current-generation Jeep Grand Cherokee went on sale in summer 2010 as a 2011 model. It was unveiled at the 2009 New York Auto Show. The fourth-generation Grand Cherokee retains its classic Jeep styling combined with a modern and sleek body style. The interior is luxurious, featuring leather trim and real wood accents, plus state-of-the-art electronics options. The 2011 Grand Cherokee has won 30 awards for off-road capability, luxury, value, best-in-class, and safety, making it the most awarded SUV ever. Among the awards are: Top Safety Pick for 2011 from the IIHS, listed as a Consumers Digest Best Buy for 2011, Safest SUV in America by MSN Autos, and Truck of the Year for 2011 by The Detroit News.

2011 Jeep Grand Cherokee Limited (Australia)
The body design is all new and has undergone testing for aerodynamic efficiency while improving ruggedness with more than 5,400 welds in the body alone. This results in a 146% increase in torsional stiffness compared to the previous design for improved durability and reduced noise, vibration, and harshness.
Like the previous generations, the chassis is a steel uniframe. Unlike previous models, the new WK2 features four-wheel independent suspension for better on-road handling. The Grand Cherokee (with the 2011 Durango) WK2 platform uses a derivative based on Mercedes-Benz's W166 series.
Engine choices include the all new 3.6 L Pentastar V6 and 5.7 L Hemi V8. Four wheel drive systems include Quadra-Trac I, Quadra-Trac II, and Quadra-Drive II. Optional Quadra-Lift suspension can raise vehicle's ground clearance up to 11.1 in (282 mm). Lift modes include Park, Aero, Normal Ride Height, Off-Road 1, and Off-Road 2. Also new is the Selec-Terrain, which has modes for Auto, Sport, Snow, Sand/Mud, and Rock. 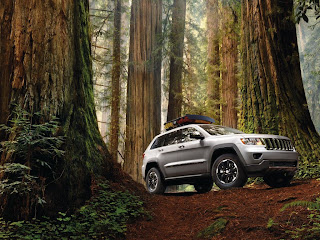 The Hemi V8 retains the Multiple Displacement System (MDS) that shuts down four cylinders in low-power driving situations. And the V8 remains coupled with the multi-speed automatic transmission which includes Electronic Range Selection (ERS) to manually limit the high gear operating range. Trailer tow is rated 7,400 lb (3,400 kg) for Hemi models and 5,000 lb (2,300 kg) for Pentastar models.
The 3.6 L Pentastar V6 replaces the 3.7 L and 4.7 L PowerTech engines. The 5.7 L Hemi engine was retained as the V8 option, although no Hemi badging is used on the exterior of the vehicle. Also, the WK program code remains. 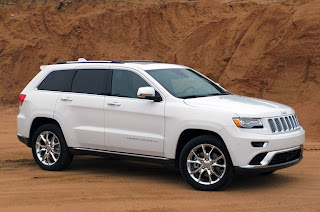 Some features changed with this generation are the handbrake being replaced by a footbrake, and the wiper stalk on the right side of the steering column being moved to the turn signal stalk, which also means the lights move to the dash. Also new is a heated steering wheel, standard on Overland and SRT8 models and available on Limited models. 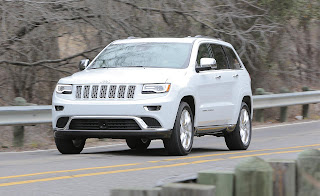 A 3.0 L turbocharged diesel V6 developed and built by Fiat Powertrain and VM Motori (with Multijet II injection) rated at 177 kW (241 PS; 237 hp) and 550 N·m (410 lb·ft) of torque will be offered in export markets by mid-2011. The new 3.0 L CRD turbodiesel engine will also be offered in European markets as 140 kW (190 PS; 188 hp) low-power version.For the 2011 model year, the Grand Cherokee was offered in five trim levels: Laredo, Laredo X, Limited, Overland, and Overland Summit. The performance SRT-8version returned for the 2012 model year. Also for 2012 a S-Limited model was offered in Germany.
Laredo was the basic model, and could be upgraded to the "X" trim package for upgraded luxury features. Limited was the luxurious model. Overland was the top-of-the-line trim package, and Overland Summit was the most expensive trim package, prior to 2012. The SRT8 392 version was the most expensive trim package for 2012, and added the 6.4-liter, 392-cubic-inch, 470-horsepower V8 HEMI engine and a six-speed automatic transmission. It also offered a tweaked version of the SelecTerrain System that added performance-enhanced modes to its basis.
In mid-2012, Jeep started a sweepstakes in order to help name a production-intent concept car based on the Laredo X model. The vehicle featured a black leather interior, twenty-inch wheels with black-finished tires, black-colored body components, and more. The winner of the sweepstakes would get their winning name put onto the vehicle, and would win one of the first of these vehicles when they would be put into production in May 2012. In March 2012, the winning name of "Altitude" was picked, and Jeep also put the Altitude name on both the Jeep Compass and Jeep Patriot, based on the Sport models of both of the aforementioned vehicles. They will be sold alongside the Grand Cherokee Altitude Special Edition.
On June 25, 2012, Jeep announced that the 2013 model year, slated to go on sale in August 2012, will be shortened due to plans to unveil an upgraded version for the 2014 model year, which could go on sale after its introduction at the 2013 Detroit Auto Show. 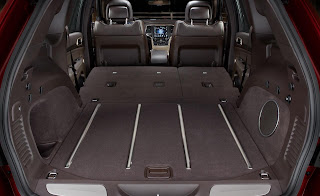 In September 2012, Jeep announced three new limited production models of the Grand Cherokee. The first Grand Cherokee would be the Trailhawk Edition, which took the name from the 2007 Jeep Trailhawk concept, upon which the 2011 Grand Cherokee was based. The Trailhawk Edition has Kevlar-reinforced off-road tires, alloy wheels, a two-tone hood stripe, and black leather interior. The model is based on the Laredo X, and includes its features. The next two models were the SRT8 Alpine and Vapor Editions, the Alpine Edition featuring Bright White Clear Coat exterior paint, and the Vapor Edition featuring Brilliant Black Crystal Pearl Coat exterior paint. Features such as a black-faced front grille, smoked alloy wheels and a black leather and suede interior are standard. This model builds on the features of the standard Grand Cherokee SRT8. Due to the popularity of the originally limited edition Altitude Edition model, Jeep announced that the Altitude Edition Grand Cherokee would be produced once again for 2013. It is unchanged from 2012. The Jeep Wrangler, Jeep Wrangler Unlimited, Jeep Compass, and Jeep Patriot Altitude Editions would be discontinued, though. These were available only for 2012. 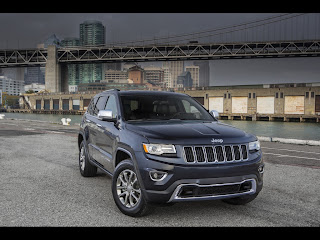 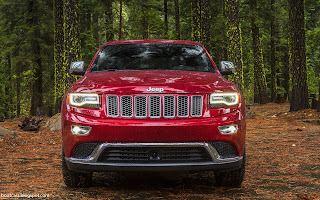 In 2012, Swedish automotive magazine Teknikens Värld revealed that the Jeep Grand Cherokee failed one of their avoidance maneuver tests known as the "moose test". Other SUV models in its class had no issues passing the test. German magazine Auto Motor und Sport (AMS) later tested the same press vehicle in a slightly different avoidance maneuver test that meets ISO (International Standards Organization) standards. Unlike the results of the Swedish test, the Jeep remained on all four wheels and did not lose any tires to a blowout. 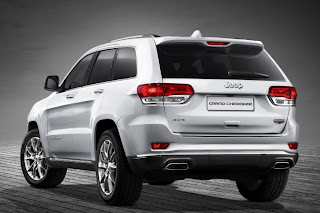 On Monday, January 14, 2013, Jeep unveiled a revised WK2 Grand Cherokee at the North American International Auto Show in Detroit, Michigan at Cobo Center, along with a revised 2014 Jeep Compass and Jeep Patriot. The new Grand Cherokee will offer an EcoDiesel V6 engine that gets up to 30 MPG, a 3.6L Pentastar V6 engine that gets up to 24 MPG and has 290 horsepower, a 5.7L HEMI V8 engine that gets up to 21 MPG and has 360 horsepower, and finally, the 6.4L HEMI V8 engine that offers 470 horsepower. The models are the Laredo, the Limited, the Overland, and the Overland Summit Edition model has been renamed Summit. A new front end with a revised body-colored grille, new, smaller headlamps, and new tail lamps round out the exterior changes. There are also new seventeen, eighteen, and twenty-inch wheel and tire choices. The SRT8 model will continue to be offered, and for the first time will offer signature details like blacked-out head and tail lamps. Inside, the Summit model receives the SRT8's nineteen-speaker Harman/Kardon surround-sound system, all Grand Cherokees receive a new steering wheel with standard paddle shifters in every model, an eight-speed TorqueFlite 8 automatic transmission, and an 8.4-inch touch screen display with Garmin navigation software, an optional CD player, and the U Connect Access System first introduced in the all-new 2013 Ram 1500. A U Connect 5.0 touch-screen radio will also be available with an optional CD player. The Selecterrain System receives multiple upgrades on four-wheel-drive Grand Cherokees. New exterior colors, new interior fabrics and materials, and new interior colors become available. The SRT8 model receives a unique steering wheel with the SRT insignia, twenty-inch alloy wheels, performance tires, and details inspired by the all-new 2013 SRT Viper. Pricing is expected to start around $28,000 MSRP, and 2013 model year production will be cut short to allow Jeep to start producing the new Grand Cherokee at Chrysler Corporation's Jefferson North Assembly Plant in Detroit, Michigan, where the Grand Cherokee has been built since its introduction at the 1992 North American International Auto Show in January 1992 in Detroit, Michigan. The new Grand Cherokee will start production in late January 2013, and will go on-sale in early spring of 2013 as a 2014 model year vehicle. 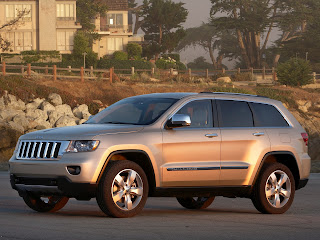 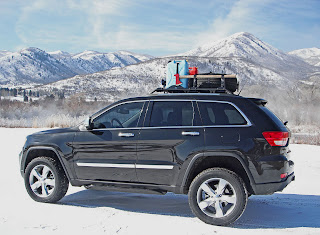